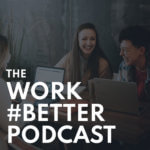 In episode 11—the first in The Work #Better series—Allison McConnell (People Ops) sits down with Ryan Kononoff (CEO) to discuss how Clearbridge uses flat leadership for better employee engagement.

Allison McConnell: All right, Ryan. Well, I’m super excited to talk to you about this topic today. This is something for me that I’ve spent some time researching and I love to see different companies using this technique throughout their organizations. And I really liked how we’ve built it into ours. So let’s dive in.

Ryan Kononoff: Great question. So I think unintentionally, we, we have evolved to where we are today, which has largely been a flat… whether you call it a flat leadership style or just a flat operational style in that we, we really want to ensure that the right people are empowered to make the right decisions at any given time throughout the organization.

And we want to give everyone the opportunity to essentially see them selves as a leadership potential and to work, work towards that. You know, my, my, my experience is that leadership doesn’t… it, you don’t have to have a special title to be a leader. Leaders sort of crop up organically and… And, and they do that by taking charge of a situation or, or by just demonstrating a skill set or knowledge or the ability to jump in and tackle something.

And we, we want to give everyone that opportunity to do that. Whether it’s for little moments or whether it’s for longer periods of time or somewhere in the middle with, with individual project projects. And so as our business has grown over the years, I think we’ve just. Naturally evolved to that style of, of, of management where you know, w where we at different points in time have given different people opportunities stepping into sort of a leadership function.

Allison McConnell: It does. Do you have any examples where that has cropped up any great examples?

I think we’ve seen certain people step up in different ways and Take charge of the situation, start to, you know, figure out what’s the problem. What can we do to move things forward? How can we communicate with the customer better? How can we ensure that our, our team is rallying in the right way and prioritizing appropriately?

And I think certain people just either they have the experience at Clearbridge or professionally to be able to better react to that situation. Or or it’s just a more natural trait of theirs to sort of take that kind of leadership role. And then separately we’ve seen. Situations where, you know, maybe someone is skilled in a certain way or has a certain aptitude for looking at problems from a different perspective and not necessarily a situation of chaos, but simply a matter of.

And we needed help to kind of figure out where things were going to go and what would function and flow well, and we saw certain people just sort of. Naturally step into that role. They weren’t asked to do that. It was just something that, that excited them and something that they were probably not truly gifted at.

And that created a lot of value for us. We don’t have you know we didn’t hire someone to help us with that. We just, we just had someone naturally step into that function. That was where we organize it.

Allison McConnell: I love that. I think that is one of the, you know, shining lights of working at Clearbridge is the opportunity to step into things that excite you and, you know, practice those leadership skills.

Do you think this concept is a widely known concept throughout our entire team?

Ryan Kononoff: I don’t know. Yeah, I think so. And I think, you know, as, as we were talking through this, I was sorta reflecting back, like where did that come from? And, you know, I, I think professionally, I had a number of roles in my career where I was given that, that latitude to sort of step into areas that needed to be stepped into at different companies that I worked for.

And I also you know, thinking about my upbringing, I had I had parents that, that sort of gave me that same opportunity in life. Where were they? You know, they always encourage me to, to learn and to try new things and to fail. And and, and there were always opportunities growing up where, where help was needed.

And I was just put in a position where I could step in and, and do whatever I could do to help out. And I think even observing my parents doing that. So I, I think that’s just been part of who I am and how I got to where I am today. And. You know, we all, we always hear lead by example. Right. And, you know, I try to, I try to live that out, you know, to the best of my abilities every day.

But when you see people operating that same capacity, we’ll, you know, we’re, we’re people in our organization have seen me step into different roles, whether it be. Posting or being part of a podcast or reaching out to customers to, you know, work through different problems that were going on or helping to chip in with our people on solving problems.

I’ve never really been afraid to get involved in, in any area of our business or even our customer’s businesses to help them with the things they needed to move forward. And so I, I think maybe that has helped build that into into the culture at least. I hope it has.

Allison McConnell: I would say, I think my first experience with I guess flat leadership structure is a book called lead without a title.

And it was the first leadership book that I ever read. And it essentially is that concept that you’re a leader. It doesn’t matter what position you do, whether you’re sweeping floors or. Running the business, everybody plays their part and everybody, you know, has a voice and should be using it. So I think that’s such an important thing for our people to understand and understand how it helps us help our customers do their best work too.

So on that note is how do you see having a flat structure encouraging Clearbridge to thrive? Like how do we thrive with it?

Ryan Kononoff: Yeah, I think, you know, just as simply as I can put it, it eliminates the bottlenecks associated with communication. You know, I I’ve, I’ve read a number of times about how Elon Musk at Tesla is super passionate about this idea that if anyone has any idea.

Or, or a method to improve the efficiency or to reduce costs related to producing their products that they need to tell whoever. Can action or put that that, that information into play to, to benefit the company and to do that. And he’s, he’s written to his people about it. He’s been interviewed and, and echo those comments.

And it’s just the idea of efficiency, right? Like when you’re building a company, when you’re trying to run a company that is. Agile in how it supports its customers. You have to be able to pivot like that. You have to be willing to listen to any and all ideas. It doesn’t mean you take all of those ideas.

But I ideas are important and often ideas STEM into new ideas, right? They build on top of each other and eventually you get to that place where you’re like, that’s exactly what we need to do. And, and so I think for me, it’s, it’s first and foremost, it’s about efficiency. It’s also about giving people the opportunity to do their best work.

If you are put in a position where you can help out in different ways, that might not be. A part of your job description or your role, or even your expectations. It gives you an opportunity to take little steps forward to demonstrate, Hey, I can take this responsibility on and I can own it and I can deliver on that.

So I think, I think there’s a, a well-rounded benefit here for us, for our customers and for our people. And it doesn’t, it doesn’t always like we w you know, there has to be some kind of. Organized leadership structure in place. But I think generally speaking you know, for, from a day-to-day operational perspective, there there’s a lot of value and, and, you know, we’ve really worked hard to avoid and to avoid putting sort of management layers in place.

And sometimes we have, and we’ve kind of gone and we’ve learned from that and, and, and we’re still learning, but I think I think for me, it really comes down to communication and that results in better efficiency.

Allison McConnell: Yeah. I also find that this is a tactic that really empowers our people as well. So I feel like efficiency and communication and empowerment are the three, like the three key takeaways from a flat structure.

That land for me. All right. I’m going to wrap this up, but I just want you in a few words, what is the one thing that you want our team to take away from this video today?

Ryan Kononoff: I think it’s, it’s that there’s the opportunity. To step in and get involved. Every single day there is, there’s an opportunity and this isn’t two or three words, but that, that, that opportunity exists to get more involved and to ensure that we’re communicating as efficiently as possible as a company.

Allison McConnell: Awesome. Well, thank you for your time today, Ryan. I can’t wait to share this with our team.

Subscribe to the #better Newsletter and, as a BONUS, get our FREE 10-Point Cybersecurity Inspection Checklist!